Family Promise has received widespread acclaim for its highly effective intervention model which relies predominantly on volunteer support from local faith based communities.  Each affiliate enlists a minimum of thirteen local congregations committed to housing between 3 to 5 families for one week periods at least four times a year.  A centralized day center allows family members to connect with social service providers, seek employment and offers educational assistance to youth.  The organization provides transportation to and from the day center and host congregations.

The national website indicates that 80% of Family Promise constituents are placed in permanent housing within eight weeks.  Due to its reliance on local volunteers Family Promise affiliates effectively mitigate local homelessness without the need for additional capital investment.

The new York affiliate is currently in development and is seeking build support for its programming.  The goal of new affiliates is to become financially self-sustaining within a three year period. 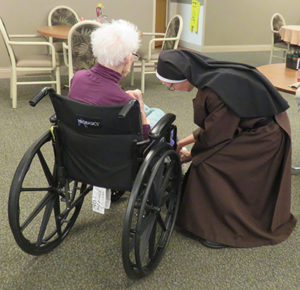 For over a century the Carmelite Sisters of the Divine Heart of Jesus have served residents of Southeastern Wisconsin.  Today the Sisters announced a new chapter in their ministry, the formation of the Carmelite Ministry of St. Teresa (CMST).  The CMST is a women’s family style residential center offering live in support and programming to adult women with disabilities.  The residential center will offer sixteen apartment style homes, community center, cafeteria and classroom space.  The Formation and Enrichment Center (FEC) will provide programming to residents and the community at large.

Sr. Immaculata, Provincial, says local service providers indicated a substantial gap in services within the disabled community.  Specifically programming on nights and weekends is very limited.  Further there is no housing dedicated to women with special needs in Southeastern Wisconsin.

The Carmelite Sisters of the Divine Heart of Jesus is a religious congregation with headquarters in Europe and Regional Provinces in the United States. The sisters have opened their doors to provide a home for the poor, originally with orphanages that served thousands of individuals in a family-like atmosphere. In more current times they have served other needy populations, such as the sick and elderly, and mothers and children who need services and care.

The Sisters have served the poor in Wauwatosa Wisconsin for more than 100 years. After many years of service to young delinquent boys at the Carmelite Home for Boys in Wauwatosa Wisconsin, the Sisters have closed that Treatment Center. As a response to the changing landscape for affordable living spaces and programs for this needy population, the Sisters are creating a new Ministry to adult women with Developmental Disabilities who are independent and ambulatory.

“THE MAGIC OF THEATER RAFFLE”

“The annual Magic of Theater raffle proceeds benefit the Academy at Civic Theatre program” explained Rhonda Schmidt. “Our goal is to raise money for the ACT program. ACT currently serves over 1000 students across Southeastern Wisconsin. We are thrilled with the success of this years raffle and pleased to award the Disney vacation to Bonita & Dean Danner.”

In addition to the grand prize, the following additional prize winners were also announced:

All prizes will be available at the Waukesha Civic Theatre Box Office during regular Box Office hours beginning Monday October 28th. Winners must present a valid photo ID. A completed claim and release form will be required for certain prize winners. Be advised a publicity photo will be taken at prize pick-up.

Waukesha Civic Theatre is one of Wisconsin’s oldest, largest and most successful theater organizations. Since 1957 the Theatre has provided quality entertainment, education and enrichment to nearly 500,000 residents. Now in our 63rd season, Waukesha Civic Theatre is pleased to celebrate the arrival of our new Managing Artistic Director, Rhonda Schmidt. Details about Ms. Schmidt, and the remaining Mainstage schedule for the 63rd season are available on the website.

Waukesha Civic Theatre extends our gratitude to all our volunteers and patrons including: WE Energies, Walmart, Walt Disney World, the Green Bay Packers, Cooper’s Hawk, the Milwaukee Brewers, the Wisconsin Athletic Club, Adventure Rock, Lake Geneva Tours, the Milwaukee Admirals and many other supporters.

(Tampa, FL) Michael Campo, award winning documentary film producer and director, announced today the launch of the iChoose Foundation.  The foundations mission will be to empower individuals one choice at a time.  Michael’s nearly fifteen years of documentary film experience lead him to begin hosting a series of conversations with remarkable and inspiring individuals he’s met over the years.  The iChoose series which includes Facebook live and instagram broadcasts quickly became an internet hit gaining a cult following across the country.

“I started getting emails and notes from folks all over the country saying ‘hey, I heard that broadcast and I wanted to let you know it really helped me’ so I started thinking how could I organize this to become more effective”, said Campo, “that’s basically how the foundation started.”

Campo says the foundation will continue its live weekly social media broadcasts but also plans to release periodic short films adding depth to the stories of particularly powerful speakers.  The first film #iChooseHOPE is available online.  Michael says he’s got a long list of celebrities and individuals from all around the world ready to share their stories.  He hopes the foundation will be able to collaborate with local and regional non-profits, sharing inspirational stories that can benefit local charities.

Learn more about iChoose by visiting the foundation website here.

(Cudahy, WI) South Side Law Offices announced the opening of a new Madison based practice which will be called “Blue Sky Law Office.”  Located just minutes from the Madison airport, firm Managing Director Mick Ademi says he hopes to offer assistance to new clients throughout the City of Madison.

Symphony Advancement will assist Blue Sky in the development of its new website targeting customers throughout the Madison area.

(Waukesha, WI) The Wisconsin Arts Board announced on April 5, 2019 that Waukesha Blair Elementary School has been recommended to receive funding for the creation of a Latino Arts Education after school program. The project must still receive final approval during the State budget process.  If funded the Latino Arts Education program will create a bilingual arts education intervention featuring Latino artists, writers and theater subject matter.

“The impact of Arts Education programming is widely recognized today,” said Symphony Managing Director Jeffrey Robb, “there is a notable gap in services, however when it comes to finding arts education programs specifically suited to a Latino audience.”

(Waukesha, WI) Whittier Elementary School located in Waukesha Wisconsin was awarded a GE Healthcare “Big Ideas” grant in the amount of $25,000.  The announcement was made Friday April 12, 2019.  A check presentation ceremony will be held on May 2, 2019 at 7:45am at the school.

Principal Tahereh DeLeon stated she was excited and overwhelmed to hear the good news.  Funding will support the creation of a special “makers space” at the school.  The proposed new makers space will include several distinct lab areas and collaboration spaces including: an online learning lab, arts space, outdoor gardens and technology lab.  The center will be named the GE Healthcare Learning For Life Center at Whittier Elementary.

Work on the new center is scheduled to begin this summer.  The project is expected to require several years to complete.  Additional funding is currently being sought to aid in equipment purchases, construction and renovation costs.